You’ve probably heard of Adobe Edge, a timeline-based tool for creating interactive and animated HTML content. Edge enables you to easily create interactive experiences that rely only on HTML, CSS, and JavaScript. If you’ve used other Adobe Creative Suite tools, such as Flash Professional, Premiere, or After Effects, then Edge will probably look quite familiar. You have a timeline and controls to edit your content. 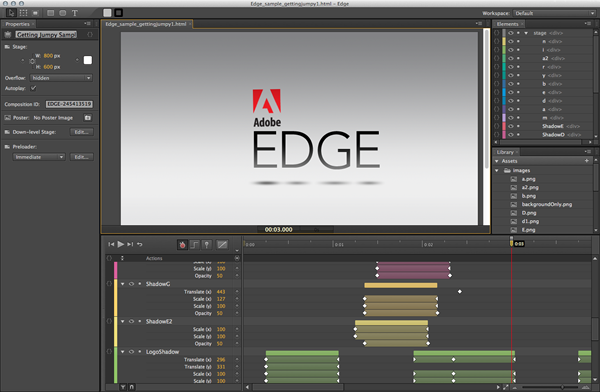 Currently, the “normal” use case for Edge is creating interactive experiences that are loaded when the page loads.  You can chain animation compositions in sequence, but they have to be in the same wrapper HTML file.  This works great for a number of use cases, but one thing I wanted to do is create an Edge animation and use that as a component that is arbitrarily added to the HTML DOM at any point in time. My findings: It can be done, although with a few gotchas.

Using Edge animations as components inside of a larger HTML experience isn’t the primary use case which Edge was designed for. However this use case is being evaluated and may end up in Edge at a later date. If that happens, this process will become much easier.

If you’re wondering “What was I thinking?”, I’ll try to explain… while discussing the process of building HTML-based apps, I had the thought:

Wouldn’t it be cool to have a really elaborate loading animation while loading data from the server? We could use Edge to build the animation!

As a proof of concept, I created a very basic application that loads two separate Edge animations on demand. Before I go into too much detail on what I built, let’s take a look at the running example. This example has two buttons, one shows a car animation, one shows an airplane animation. It’s pretty basic and straightforward:

The first thing that I did was create two simple Edge animations which you can view here:

All images used in these animations were obtained from thenounproject.com.

Once the animations were complete, I started looking at the generated HTML output, and figuring out how I can add it to the HTML DOM of an existing HTML page. I then started putting together the sample application using Mustache.js as a templating engine to abstract HTML views away from application logic. Note: I also have a simple utility that enables me to include Mustache.js templates in separate HTML files, so that I can keep everything separate.

First, I created the basic shell for the application. It is more or less an empty HTML structure, where all content is added at runtime:

In order to get this working, I had to change a few things in the generated Edge output:

Since I am using Edge in a manner for which it was not initially designed, there are a few “gotchas” that I ran into:

If the capability to have Edge animations as components gets built into Edge (which I hope it does!), then you will not have to go through all of these steps, and it will be much easier.   I’ll be sure to share more if this feature develops.

If you haven’t yet seen what Edge can do, you really should take a look at some of these examples built with Adobe Edge: