Here are some interesting and quite surprising statistics for the US Census Browser HTML/PhoneGap showcase application that I released in December, which I wanted to share. The app is a browser for US Census data, full detail available here: http://www.tricedesigns.com/2010-census/. The Census Browser application was intended as a showcase app for enterprise-class data visualization in HTML-based applications, and all source code is freely available to the public.

What is really surprising is the “health” of my app within the given ecosystems. I offered the app as a free download in each market. The app is focused on Census data, so there is obviously not a ton of consumer demand, however the data is still interesting to play around with. I would not expect the same results for all types of apps in all markets.

Here are a few observations from the data:

The general public perception/assumption that I encounter is that the iOS market is strongest, followed by Android, and that BB is dead. These numbers show a conflicting reality. Barnes & Noble was the strongest, with iOS in second place, and BlackBerry just behind iOS.

Here is the full data for downloads in December: 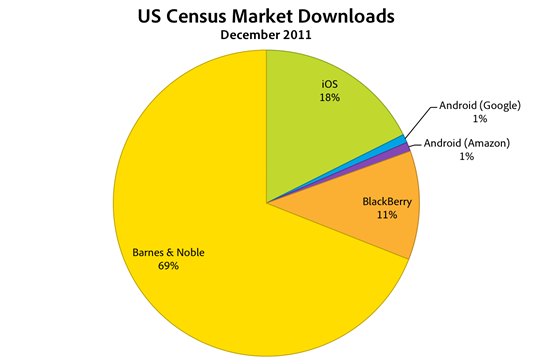 Lots of people got Nook devices for Christmas this year: 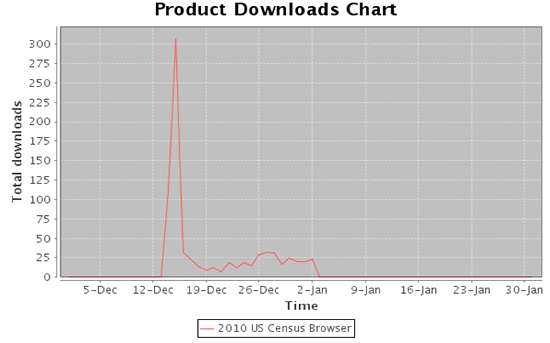 iOS traffic peaked just after the inital release with an increase after the winter holidays, but has been more-or-less consistent with no “spike”: 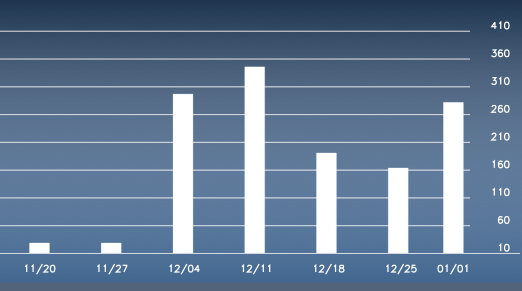 Amazon Market only had 8 downloads on Christmas day – this is likely the result of the fact that the Kindle Fire is branded as a consumer media device, not an analytics/computing device:

Know what else is interesting?   The charting/analytics for Amazon, Google, and Nook markets are all built with Adobe Flash, with both Amazon and Nook built using Adobe Flex.