If you haven’t heard about the new Camera Shake Reduction feature coming to Adobe Creative Cloud members this June in Photoshop CC, it is a new filter that will analyze your photos to detect and correct blurring due to a shaky camera. Yes you read that correctly, it can make a shaky/blurry photo LESS shaky/blurry. It’s an awesome new feature that can be used to enhance photos under low light conditions or taken with slow shutter speeds. Check out the official teaser video below:

This can have huge implications, everything from enhancing precious photos of your loved ones, to crime analysis and forensics. Speaking of which, did you know Adobe does some amazing work with law enforcement and image forensics?

Like any other curious individual, I wanted to test this out on my own, with my own photographs. So, I broke out my camera, set it to have a slow shutter speed (for intentionally blurry photos), and started walking around and taking pictures. I was completely blown away by the outcome.

Let’s take a look at the results…

In all of the following examples, the image on the left is the original. The image on the right is the enhanced/corrected image. The only changes that I have made are camera shake correction and minor color/contrast corrections. I have not used any other touchup/enhancement or alteration techniques. It’s amazing how much detail was able to be pulled out of the original blurred images.

First, let’s take a look at an office building. The enhanced image has much more detail, including brick textures, more readable/discernable content, and while it has some minor artifacts, it is a huge improvement.

Now, let’s look a little bit closer… If you’ve already glanced at the image below, you’ll see that I was able to extract the license plate from a car that just happened to be passing at the time I took the photo.

Seriously, this is real. All of those “image enhancement” sequences that you’ve seen in crime and sci-fi movies and TV shows (which you’ve probably rolled your eyes at) are now a reality. Still don’t believe me? Take a look at this video I put together for a closer look.

Note: I edited this down to the “short version”, in reality it took a lot more trial and error and permutations of the shake reduction tools to achieve the final result.

That’s not all, I was able to extract detail about other items in the photograph. For example, You can now see enough detail to identify the light bulb in the street lamp. 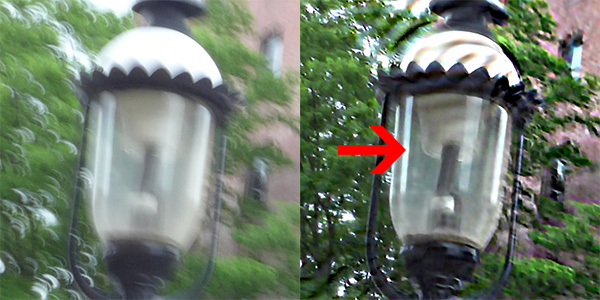 You can even make out the faint outline of the bicycle and arrow on the “bike lane” street sign behind the car.

Pretty cool, right? Now, let’s take a look at another example. Again, the blurry image on the left is the *original*.

You can see that the enhanced image is sharper and has more detail. Let’s look a bit closer…

In the original image, did you see that guy in the blue shirt standing walking towards the white van? Yeah, neither did I:

Or, could you tell what kind of cars were in the parking lot? I know I couldn’t in the original, but I can make a much better educated guess in the enhanced image: 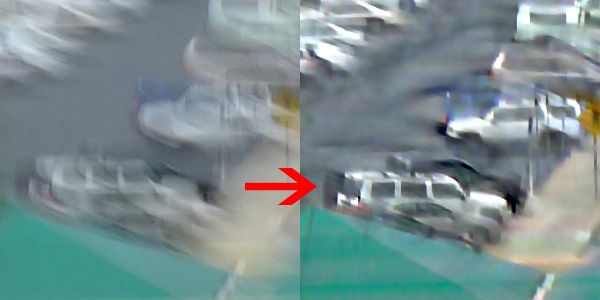 OK, let’s take a look at one more. In the enhanced photo on the right, you can see much more detail… everything from the brick patterns, to street signs, to details on people and objects.

While you still can’t read the entire law office sign, you can certainly see more detail in both the sign and the surroundings. 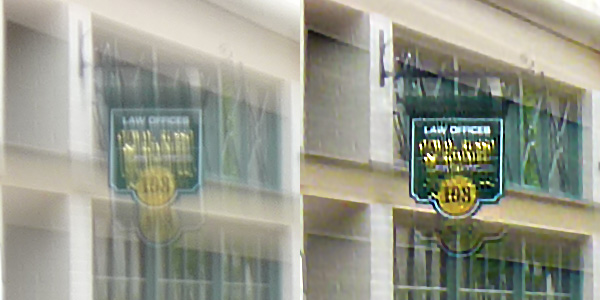 You can also make out much more detail on people, doorways to buildings, flowers, and leaves on the trees. 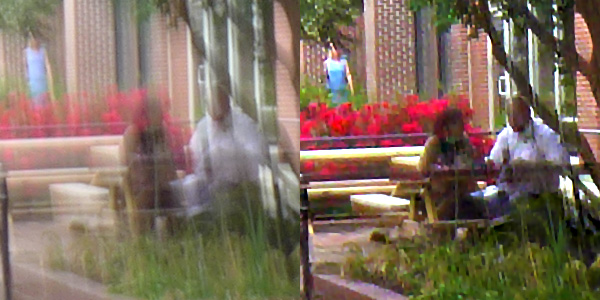 Again, The only changes that I have made are camera shake correction and minor color/contrast corrections. There have been no other modifications made to these images.

All of my test images have fairly significant shake blurs. Due to the extreme amount of blur, there are some visual artifacts. Any images that have a less extreme blur will have fewer artifacts, with enhanced clarity.

You can reduce artifacts and improve the final output quality by experimenting with the Camera Shake Reduction options. You can create multiple regions for estimating blur, and adjust trace bounds, smoothing, and artifact suppression for each. You’ll likely need to experiment with the settings and try different permutations to achieve optimal results, but you’ll be amazed by the outcome.

It’s important to understand that while it can “work miracles” on some images, the Shake Reduction feature will not correct all blur in all types of images. If the blurring is because your image is simply out of focus, this probably won’t help. Again, it is intended to correct blurs caused by a shaky camera situation.

If you’re wondering how to get this feature, just go over to creative.adobe.com and become a Creative Cloud member today! Photoshop CC will be available in June, and you’ll be notified.